The Big Lake will be the center of attraction next weekend as the oldest freshwater sailboat race is all set to kick off on the Lake Superior on August 5th, 2017. 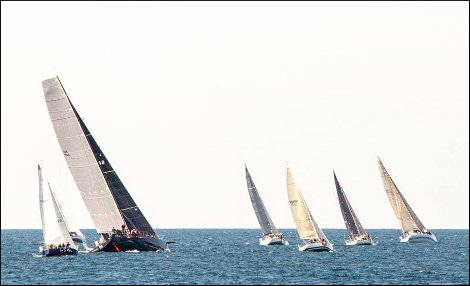 The event is the biannual Trans Superior International Yacht Race and it is in its 25th edition. It is only fitting that the Lake Superior hosts the 25th edition of this freshwater lake race.

The member of the 2017 Trans Superior race committee Dave Johnson said that the Lake Superior is one of the biggest inland lake races to happen in the Mercian waters and the other t3o competitions are the Chicago Yacht Club Race to Mackinac and the Bayview Yacht Club Port Huron to Mackinac Island Race. He is happy that the lake race is culminating at the Lake Superior.

The George Kemp Marina is getting spruced up for the event and the boats will soon set anchor at the marina to compete in the race. Johnson said that the organizers are expecting the boats to start arriving from Wednesday to Friday. They will all be locking through at 8 am on Saturday. END_OF_DOCUMENT_TOKEN_TO_BE_REPLACED

In the America Trophy (the MAISA Co-Ed Spring Championships), total 18 team participated and among them sailing team of Washington College was one of them.

On the final day of the race, the team of Washington College sailing finished in 15th position and in the Salisbury Spring Open championship they were first of five teams.

What happened in the America Trophy (MAISA Co-Ed Spring championship)?

END_OF_DOCUMENT_TOKEN_TO_BE_REPLACED

Ireland and sailing reached a pinnacle when Annalise Murphy received a silver medal in the Olympics in August 2016. Sailing received due attention in the country and the public interest as well. The Medal race was watched with great interest by most people of the Rio Olympic event.

Annalise Murphy had been received well with garlands and national award honors as well as elevated to the status of Volvo Sailor of the Year. The awards ceremony was held in Dublin on the last Friday of January. This helped to resurface some of the attention that had initially been grabbed after Rio was completed.

The awards ceremony brought in sailing professionals from different parts of the country and helped refresh the minds of people that much talent exists in the country in competitive sailing. For instance, Annalise Murphy as well as Ewan MacMahon was awarded who was acclaimed as Youth Sailor of the Year. The shared enthusiasm among professionals in the same sport made the evening special. END_OF_DOCUMENT_TOKEN_TO_BE_REPLACED

The Helly Hansen NOOD (National Offshore One Design) Regatta series of 2017 scheduled has been prepared.


The five-stop series will cover sailing destination of countries that are renowned.

Helly Hansen is a company providing technical apparel for sailing and has experience of more than 130 years in the field. The sailing apparel protects professionals in the water. The company has sponsored the NOOD since three years and this is the fourth time, it has come up with NOOD.

END_OF_DOCUMENT_TOKEN_TO_BE_REPLACED

The Canada’s Cup was first competed in the year 1896. The 24th edition of the race has kicked started on the 10th of September 2016 and will be held till the 14th September. This challenge driven race is between Canada and United States of America. The defender of the race event is Royal Canadian Yacht Club of Toronto and the challenger team is the Sodus Bay Yacht Club of NY. This prestigious and famous regatta and match race will be taking place in the Great Lakes region. The top sailors and yacht designers are attracted to this race because of its rich heritage and history. The key aspect of this regatta is the challenge that it poses for the boat and the sail design. This is a challenge driven race that has 5 race series and a fight between two boats. The defending boat this year is Hollandia from the Royal Canadian Yacht Club and the challenging boat is Yquem 1 from Youngstown Yacht Club. END_OF_DOCUMENT_TOKEN_TO_BE_REPLACED

The Sailing World Cup was held in Qingdao and similar to the weather conditions in Sheboygan, the weather here also made the sailors wait for day three as the first two days the weather remained unfavorable for sailing.

This was similar to the conditions that were witnessed in 2008 when the Beijing Olympic Games were held. Sailors at Quindao had to meet with tricky weather elements such as currents and cloud cover. Not only did the visiting sailors suffer, but also those who were competing as part of the host nation. They also made mistakes and lost out points.

In the Laser men category Croatia remained on top of the fleet. Tonci Stipanovic was able to hold off Coccoluto who was trying to gain above the Olympic medalist. The Cyprus team made some bad starts in the beginning, but they recovered and finished in the second as well as the fifth place. The team admitted that they made certain mistakes in the beginning. However, when the current was strong they were able to move into fifth position. The forecast was said to be similar in the coming days with light winds and strong current. However, when the sailors went out to the waters, it was not found to be so. They found favorable conditions for sailing though cloud cover kept coming about and pressure and wind shafts kept moving up and down. END_OF_DOCUMENT_TOKEN_TO_BE_REPLACED

There are norms that need to be followed in World Sailing events. Many consultancies and firms are involved in determining that the participants who apply are adhering to the rules, guidelines and parameters set. One Russian sailor has been excluded from the Rio Olympics as certain guidelines were found to be inconsistent as per the guidelines set for the Olympics.

Indeed, World Sailing plays an important role when it comes to deciding on the sailors from the different countries who wish to participate in the sailing Olympics. There have been a team of seven sailors from Russia who have applied to participate in Rio Olympics, but one participant was found to have not adhered to the requirements set for the 2016 Rio Olympics. END_OF_DOCUMENT_TOKEN_TO_BE_REPLACED

The absolute beauty of Costa Smeralda does not tell the whole tale about why the sailors come back every year to the Maxi Yacht Rolex Cup.

The third day threw up a dissimilar set of challenges to the first two days of contest, and this is the challenge of the unknown, how one could deal with the unexpected, which keeps these contestants coming back for more and more.
Shiftier, lighter breezes worked quite nicely for Momo, Dieter Schön’s new seventy-two-footer that won both today’s races to clutch the lead in Rolex Maxi 72 World Championships. Of the forty boats as well as five racing classes, Thomas Bscher’s hundred-and-seven footer Open Season is the one to have saved a clean sheet thus far, securing all her races in Wally Division.
Still, this is not just the newest boats that are fearing well in the blend of all conditions in Porto Cervo. New leader in Mini Maxi Racer Cruisers is Giuseppe Puttini’s vintage Swan 65 Shirlaf (of 1976), which is one of the most advanced yachts of her day and it is still gracing the world’s top regattas almost forty years later.